The arrival of significant numbers of Latvians to the Philadelphia area dates back to the mid-1880’s. At that time, Latvians in their homeland were being politically persecuted and economically exploited by both the Russian Empire’s government and German land barons. Latvian communities also existed in Baltimore, Boston and New York, where lay services were conducted as early as the 1880’s. Initially, the Philadelphia Latvians were associated with the German congregation of St. John.

In 1892, nine Latvians found the Philadelphia’s Society of Free Letts. The following year the Latvian Evangelical Lutheran Congregation of St. John was founded. The congregation’s stated purpose was to promote each congregant’s spiritual life, to help maintain congregants’ shared ethnic and religious heritage, and to encourage each individual to set a virtuous example. The congregations’ Charter was signed by 53 men, given that only males had the right to vote under the rules of the Missouri Synod at that time. Dåvidu Krizi is elected to serve as the first Church Counsel President. The newly formed entity began its work under the auspices of the original German St. John’s Church.

Reverend Ånsis Rebåne
In 1896, pastor Ånsis Rebåne arrived in Philadelphia from Latvia. The first Latvian language service at St. John’s took place with the participation of 115 parishioners. Services were held twice a month, a choir was formed and the “Ladies Auxiliary” started organizing evening teas with a prepared program. That same year, two more Latvian congregations were established in Baltimore and New York.

In 1903, a rift divided the Philadelphia Society of Free Letts and a parallel disruption occurred in the life of the congregation. In 1905, the rift was healed. However, the Russian Revolution of 1905 resulted in a new wave of immigration, leaving its mark on Latvian’s everyday life and cooling the relationships with the German Congregation. Notwithstanding these difficulties, pastor Rebåne continued his regular missionary work throughout the United States. In 1908, pastor Rebåne died and the congregation resumed its lay services.

By the early 1900’s, there were about 1,000 Latvians in the Philadelphia area. The congregation’s later history can be summarized as follows:

The congregation entered a new era in 1930 with the arrival of Pastor Fridrichs Pudzelis. Services now held in English and Latvian were well attended.

In 1931, the congregation purchased its own church on 47th street with the material support of the Missouri Synod. The first service in the Latvians’ own church was held on April 5, 1931. The Great Depression brought hardship to the congregation. Pastor Pudzelis left in 1933 but served as a visiting minister for several years. The new church was left with no resident minister until 1949. During this time services were held in English by guest ministers. 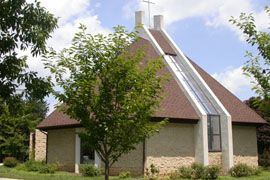 Reverend Davis Kaneps
In 1992 the congregation celebrated its 100th anniversary and purchased a beautiful 5 acre property in Newtown Square. Pastor Kaneps headed the parishioners at Newtown Square until 1997 when he moved to serve a Latvian congregation in California.

Reverend Kristine Suna
In the fall of 1997, pastor Kristine Suna from Latvia was elected to become the next spiritual leader of the congregation. On Easter Sunday 1998, Archbishop Elmars Ernsts Rozitis blessed the cornerstone of the future Latvian Lutheran Church of St. John. The construction of the new church building began in July, 1999 and was completed in 2000.

In 2005 Kristine Suna entered a full time graduate program in theology to pursue a doctoral degree. The congregation was of course saddened by her departure but delighted that she chose this as the next step in her career, and wish her all the best.

Rev. Ieva Dzelzgalvis
In February 2006, at the invitation of the Church and with the support of the leadership of the Latvian Ev. Lutheran Church in America, Rev. Ieva began holding weekly services and tending to the needs of the  congregation. She received her ThM from Dallas Theological Seminary in 2005, and supplemented her education by completing coursework at the Lutheran Seminary of Gettysburg and Philadelphia. Rev. Ieva was ordained as a deacon in 2006 and ordained as a minister in 2008 by the Latvian Evangelical Lutheran Church in America (LELBA). Rev. Ieva served the congregation for fourteen years prior to retirement in 2020.

Rev. Gija Galins
Pastor Gija began to serve the congregation on April 1, 2021 with her first service being held on Easter Sunday, 2021.

Pastor Gija Galins most recently served the Latvian Lutheran Church of Lincoln, NE from 2015 to 2021 with previous service at Latvian congregations in Takoma WA, and Oregon. She started her pastoral journey in Latvia serving congregations in Madliene and Zaube.

Pastor Gija Galins earned her Master’s degree from Seattle University in Pastoral Counseling. She holds two Bachelor’s degrees, one in Theology from the University of Latvia, and a second from the Art Institute of Portland, OR. Additionally, she has completed certification in clinical pastoral education and has pursued coursework at Creighton University.